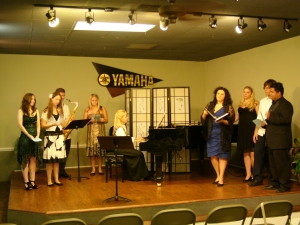 2011 Sarasota team rehearses "What the World Needs Now" before concert

Ben & I Play for Peace- Sarasota was conceived just 7 weeks before the scheduled date of Sunday, April 3, 2011.  Determined to bring Ben & I Play for Peace to the east coast, we were able to bring together a beautiful concert which raised $830 for Wheelchairs for Iraqi Kids.  Piano Distributors of Sarasota generously donated the use of Peg Madill Recital Hall and provided a lovely, spacious area for the reception.

Students from the music department at State College of Florida, Manatee-Sarasota performed during the first half of the concert.  The team of students brought a great deal of talent and enthusiasm to the table.  From left to right in the picture shown are Regan Hooper, soprano, Marilyn Ferral, flute, Josh Tuttle, saxophone, Tara King, soprano.  Lurray Myers was our pianist for the afternoon.  She serves on the faculty at State College of Florida.  Continuing from left to right are Martha Lopez-Leschke, soprano, Director of Ben & I Play for Peace- Sarasota, Kristine Nelson, mezzo-soprano, David Duque, baritone & guitar and Roman Vazquez, guitar.

The program itself comprised of a wide variety of music.  In the first half of the program, the music ranged from Anton Diabelli to Michael Jackson!  Martha Lopez-Leschke, soprano and Lurray Myers, piano performed in the second half of the concert, singing music by Wolfgang Amadeus Mozart, Theron Kirk, Fernando Obradors and Carlos Guastavino.  The performance concluded with a song performed by all members of the team.  We sang “What the World Needs Now” by Burt Bacharach.  The audience joined us in the refrain:  “What the world needs now is love sweet love, it’s the only thing that there’s just to little of.”  Everyone present really did “play for peace” with us on that special day.

After the conclusion of the program, everyone enjoyed a beautiful reception organized by SCF student Tara King.  Troyer’s Dutch Heritage, Brown’s Grove and Chick-fil-a generously donated items for the reception.